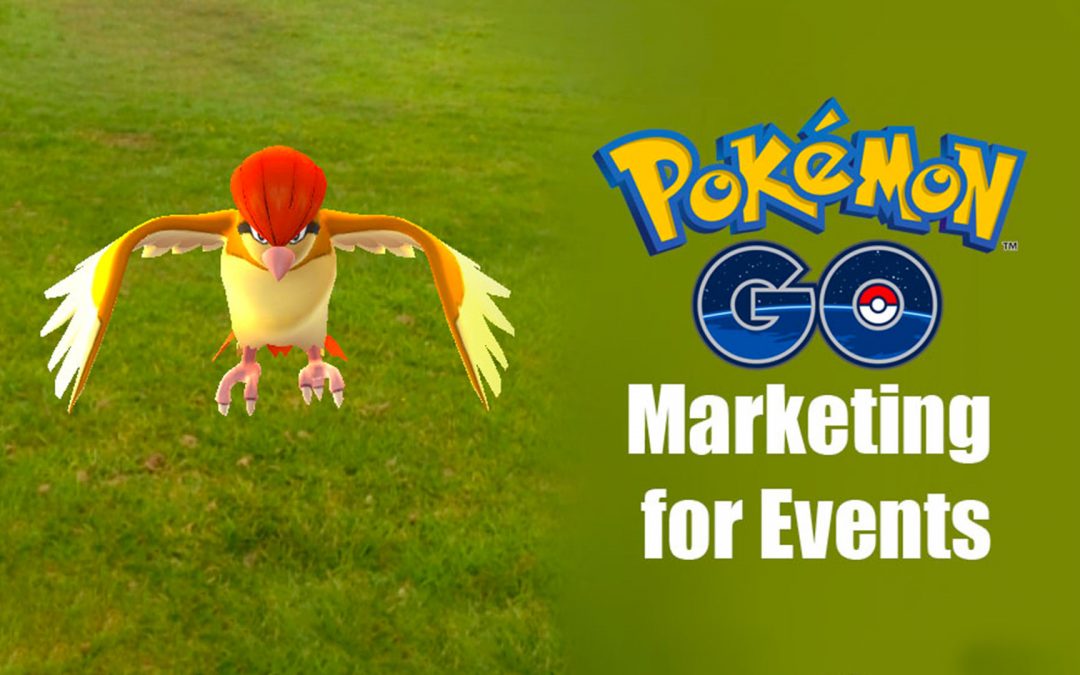 One of the biggest popular phenomena that we will remember of 2016 will undoubtedly be Pokemon GO. From a standing start, this augmented reality game app became one the most active (and I use that word deliberately) platforms in the world. Even before it was officially released there, most of the social-media conscious countries saw the movement spread virally. It quickly (within about a week) surpassed Twitter in number of active users, then became more popular than Tinder and within two weeks was showing more active use than Facebook.

Think about that for a second: a twenty-year-old brand which had been written off as a passing childhood fad 15 years ago was suddenly all over the news media, social media and with more activity than the biggest social platform the world has ever seen. Whether you turn your nose up at it or not, you should notice it.

It’s all about the eyeballs

If you’re wondering why anyone in the events industry should pay attention to Pokemon GO, the reasons are very simple. I’ve been working in the digital design and promotion business for around 25 years. Two decades ago I had to persuade businesses that the Internet wasn’t just a passing fad. Today, every business has to have a website. Around ten years ago, I started persuading businesses that social media was important, that they needed to understand it and that it wasn’t a passing fad. Today, every business needs a social media strategy. Now, I’m telling our clients to take Pokemon GO marketing seriously. This particular app may not be around in ten years’ time, but the businesses that take it seriously will be capitalising on today’s lessons for years to come.

But don’t take my word for it. Step outside, look at how many people are playing it right now. People of every age, some in t-shirts, and some in suits. Whatever people pay attention to is where your marketing should be focused. It’s not rocket science.

Of course, Pokemon GO marketing is only relevant to some businesses and some types of event. It’s unlikely that a luxury brand such as Aston Martin would benefit from the association. However, when/if a James Bond augmented reality app becomes available, the lessons learned from Pokemon GO marketing will prove vital.

Let’s say that the demographic does fit your event, though. Let’s assume that you want to attract attention from males and females anywhere in the smartphone-using 15-45 age range. Let’s assume that you want to keep people in your convention centre during those boring times between speaker or workshop sessions. Here are a few ways that you can do that with Pokemon GO marketing.

Are you a Pokestop or a Gym?

Playing the game itself involves using certain in-game resources which can be replenished for free at certain locations called Pokestops. At it’s simplest, the purpose of the game is to catch Pokemon (small creatures loosely based on real animals and flora) that appear randomly at certain locations. As the game is played using augmented reality, this means that these locations correspond to certain physical locations in the real world, often based on landmarks. For example, near to where I live there are three Pokestops located at the local post office, library and church. To use them, players have to walk to these locations and, once close enough, they can replenish their supplies. They can do that once every five minutes, so players sometimes travel to one Pokestop, walk to another, then return to the first, or plan their route according to where Pokestops are located, catching Pokemon if they turn up. Players can also place virtual lures at Pokestops to increase the chances of a Pokemon appearing.

This is why it’s a good idea to find out if the location of your event is close enough to a Pokestop to attract and keep attendees who also happen to be Pokemon GO players happy. You can deploy a number of tactics to attract attendees and keep them in the venue. At critical moments during the event you can placed Lure modules, which attract Pokemon to the Pokestop. This way, you could attract more people to the event and keep those people engaged, even during parts of the programme of activities which are not directly relevant to every attendee. Be sure to capitalise on this via social media by encouraging players to use the event hashtag through the event.

Most of the business events I’ve ever been to are characterised by two things: there are a few really interesting bits interrupted by acres of dull waiting. Often, if there’s too much of the latter, I’m out of the door and heading off to do something productive or entertaining. One original way to prevent the draining away of some of your attendees could be to organise a networking safari, using Pokemon GO. Here’s my idea: you simply combine networking with gameplay by putting small groups (teams?) of attendees and challenge them to get to know each other whilst finding Pokemon at and around the venue. Set a time limit and award prizes at the end for the team that has caught the most and/or got to know most about each other.

Not all events are corporate affairs. if your event is community-based, a great way to use Pokemon GO marketing to promote and enhance the experience could be to organise a Pokemon-themed gathering, such as a barbecue or family fun day. In Plymouth, Devon and Cornwall Police organised a safety awareness afternoon by teaming up with the local Pokemon GO group to hold a Pokemon hunt which also emphasised child safety. Officers held presentations, talked with families and took part in the fun. An interesting way to gamify a serious message.

Almost every event, corporate or otherwise, could do with a little colour and drama. If it’s relevant to your event, try hiring a few cosplayers to liven up your events by appearing as characters or creatures from the Pokemon franchise. It can be highly affordable as many cosplayers dress up for fun and being hired to appear at an event could be seen as a way to fund their hobby. Don’t exploit anyone’s passion for cosplay though, pay them a fair amount for their time and effort. Be sure to use ones that take their cosplay seriously though, as beginners’ costumes could be a disappointment at a professional event. Most serious cosplayers will remain in character throughout the event and also be happy to pose for photo opportunities with attendees as well as for press. These photos of course become valuable assets when promoting future events, or just for post-event PR.

Social sharing is a must at any event, but Pokemon GO players will particularly appreciate it if you include them in your posts and reward them for sharing photos of Pokemon at your venue on social media. Sharing the sighting of a Pikachu in a particular talk could see a sudden rise in attendance for that speaker!

Get an education. Find a consultant that actually understand this phenomenon and how it intersects with business. Get them in to talk to your marketing team (yes, I am available). Connect with your local Pokemon GO community. Develop a strategy. Nobody knows how long the popularity of Pokemon GO will last (I happen to think it’s got a much longer lifespan than critics expect because the real news is that augmented reality has finally found it’s killer app) but it cannot be denied that this game app has peoples’ attention, and today we absolutely have to be smart about that. For event planners and marketers, it’s never been more important to recognise that the currency of marketing is based on the economy of attention.

Ash Mashhadi is a Web Designer, Social Media Consultant and a popular business speaker. He's the founding Partner of Design Inspiration, a highly experienced digital design agency. Ash also acts as a consultant to small and medium-sized businesses in the use of social media for inbound marketing. He is also the author of "The Pocket Guide for Nervous Networkers".

What is the Difference Between a Keynote Speech, Seminar or Masterclass?
Maximising Your Event PR Timeline
Marketing Tips To Promote Your Exhibition Stand
Top Tips to Maximise PR for Your Event